Sunday mornings throughout her childhood, Tiara Hicks would wake up on her grandparents’ farm to the smell of freshly brewed coffee.

She would gather with her grandparents, Larry and Joyce Patty, around the heart of their home — the kitchen table. At 4 years old, Hicks shared her first cup of coffee with them. She’s been drinking it black ever since. Her grandfather, who enjoyed his coffee with sugar and cream, always joked with her.

Around that kitchen table, Hicks would read her grandparents their horoscopes from the newspaper before flipping to the advertisements. There, she and her grandfather would find their adventure for the day. Sundays were the only day her grandfather had off from working as a gardener on another local farm, so they’d often try out a new restaurant, visit an antique store or buy horses for their own farm.

As Hicks grew older and moved away from home, she still made a point to drive an hour back to Muncie from Indianapolis for Sunday breakfast with her grandparents, sipping coffee as they caught up.

Larry Patty taught her the meaning of hospitality, Hicks said. He always opened the door for visitors to invite them in for a cup of coffee and a chat at the kitchen table.

When Hicks opened a coffee business on Muncie’s Southside, she named it Rosebud Coffee House after her grandfather, whose nickname was “Rosebud,” because of his love for yellow roses. The shop’s specialty drink — the Rosebud — is nutty, floral and fresh, as its ingredients are espresso, rose and pistachio.

“I swear to you, I never saw him drink anything other than coffee. It was on him 24/7,” Hicks said. “Coffee and gathering around the table — it's the conduit to conversation and community for me. It just seemed natural that I would make [Rosebud Coffee House] about him.”

In 2018, two years after Hicks and her husband moved to Selma, Indiana, from Indianapolis, she came across a vacant ice cream stand for sale. Since earning her bachelor’s degree in business management in 2008 and master’s degree in business administration in 2010 from Indiana Wesleyan University, Hicks knew she wanted to start her own business, and seeing the ice cream stand was the first time she visualized creating her own cafe with a coffee bar, she said.

After a local realtor showed her the property, Hicks presented her business plan for a cafe to the Selma Town Council. Even though the council accepted her business plan, if Hicks followed through with it, she would have taken on a lot of debt to repair the building.

Ted Baker, executive director for the Innovation Connector, was present at Hicks’ meeting with the Selma Town Council. He shared her proposal to Muncie’s Southside to the 8twelve Coalition of Muncie, a team of 15 organizations that operate in Muncie’s core neighborhoods bordered by 8th Street and Memorial Drive. The coalition is driven to revitalize the area through a sense of community, social cohesion and collective action.

Jena Ashby, director of impact and programs at the Greater Muncie Habitat for Humanity, said 8twelve proposed Hicks open the coffee house at 1805 S. Hoyt Ave. because of the high traffic at the intersection of Hoyt Avenue and Memorial Drive. Ashby said she believes this corner’s revitalization will return pride to this area.

“When I am there, I love the mix of people I see enjoying the coffee shop — business professionals having meetings, students — both high school and college — doing schoolwork and neighbors spending time together,” Ashby said. “I am grateful for Tiara taking the risk of starting a small business here and the other partners who have supported this development so that it can happen.”

Rosebud Coffee House opened its doors December 2020 across the street from the Greater Muncie Habitat for Humanity. From her office window, Ashby said, she can see Muncie’s Southside gather at Rosebud Coffee House, as it's living out the 8twelve Coalition’s foundational outcomes to build a sense of community.

“I get a lot of folks from Ball State who have never been past downtown,” Hicks said. “They have never been on this side of town. We’re pulling people from Cowan and Selma, and people who are out in the country, and we’re bringing them into town. They have a reason to come to the Southside now.”

Gathering around the table

With her family’s help, Hicks began renovating the former bank in fall 2020. One of Hicks’ challenges while renovating was deciding how to bring a cozy feeling to the cold, gray concrete throughout the building.

“I want you to come in and sit around the kitchen table,” Hicks said. “A family gathered around this table at some point in time, and I feel like those little touches helped warm up the space.”

Because a bank is wired differently from a coffee shop, Hicks said, she had to add outlets for customers to plug in devices from any table.

To further emphasize Rosebud Coffee House isn’t a drive-thru stop, the space offers two meeting rooms for customers to use and stay awhile. Customers can reserve a meeting room or take advantage of an empty room during their visit.

One of the coffee house’s meeting rooms was the bank’s vault. Hicks kept the vault’s original door, but inside is a floral black-and-white tiled floor framed by artwork and a white board. She also installed a small ceiling fan to help its air circulation.

“People sometimes — I kid you not — still pull up in our drive up and say they want to make a deposit,” Hicks said. “It was a bank, and that’s what people remember it as, so I just played off of that.”

Hicks starts her workday at 5:30 a.m. when she turns on the stove and espresso machine before opening Rosebud Coffee House’s doors at 6 a.m. In the early hours, Hicks works alongside her mother, Darla Fox, who bakes muffins, cinnamon rolls and other pastries.

A few days a week, Hicks’ grandmother, who turned 86 years old in March, cooks in Rosebud Coffee House’s kitchen as well, “supporting me in full heart as my biggest cheerleader,” Hicks said.

Two to three employees arrive at 7 a.m., and they take full responsibility for making customers’ orders at 8 a.m.

Ball State junior Sarah Leatherberry and Brian Carless, a 2016 Ball State alumnus, both work the morning shift at Rosebud Coffee House. Leatherberry and Carless were part of a group of six employees who were all hired together when the coffee house first opened.

Leatherberry, a social work major, said she typically works from 8 a.m. to 2 p.m. making customers drinks. She enjoys seeing regulars’ cars pull up, she said, because she knows their orders and she’s able to have them ready.

Leatherberry and Carless had never worked as baristas, but Hicks introduced them to the coffee world and its preciseness. For example, she taught them how milk needs to be steamed between 130 and 140 degrees Fahrenheit so customers’ drinks are frothy.

Hicks learned the ins and outs of the coffee world herself from her time volunteering at Union Chapel Ministries’ coffee shop throughout 2019. She also took a class from Frank Reber, who owns The Caffeinery, and asked for advice from Robyn Littler, owner of Noble Coffee & Tea in Noblesville, Indiana.

“Hicks is one of the best managers I’ve ever worked for,” said Carless, who is also a Thomas Park/Avondale neighborhood representative on the 8twelve Coalition. “She’s really encouraging and graceful when mistakes are made. A lot of us are newbies in the coffee world. She’s been super supportive and is always making sure we’re getting enough sleep.”

Customers are taking ownership of Rosebud Coffee House, Carless said, as customers have told him the cafe is their favorite place to get their coffee in Muncie.

Juli Wright and Dorothy Douglass are two of Rosebud Coffee House’s regular customers. Wright and Douglass have been friends since they met during a women’s retreat in Winchester, Indiana, in 2005. The two Southside residents bonded over their birthdays being two days apart and their love for crafting homemade cards.

Because supporting small, local businesses on Muncie’s Southside is important to both Wright and Douglass, they said, they regularly sit on Rosebud Coffee House’s leather couch to catch up while eating French toast muffins.

“On Saturdays, you have to be here by 9 a.m., or they’re sold out of cinnamon rolls. That’s the only day I can sleep in, but, sometimes, I have to wake up and come anyways,” said Wright, who visits Rosebud Coffee House almost four times a week. “[Rosebud Coffee House] is 6 blocks from where I live, and it’s pretty much on my way to work [at Carter Lumber.]

“I pull up on the drive-thru, and they say, ‘Do you want your usual?’ Out comes my large black coffee and my French toast muffins. Every once and a while, they’ll say, ‘We got a new muffin today. Do you want to try it?’ and I have to make that tough decision.”

At 5 p.m., Hicks locks the doors to Rosebud Coffee House and drives home to her three teenagers. She watches her daughter cheer at basketball games, cuts her son’s hair and decides what to cook for dinner.

Since owning her small business, Hicks said, she and her employees have learned a lot together. For example, Hicks was making iced drinks by adding the flavoring, espresso, milk and then the ice. But, one day, she saw one of her employees put in the ice before the milk, which prevents splashing. She’s now an ice-first advocate.

“Patience is a virtue that escapes me, and I am having to embrace it,” Hicks said. “I’m delegating now, making sure I’m not trying to do everything myself, and letting go to let the team handle things. Just because I said do it one way doesn’t mean it was the right way is what I’m learning.”

As Hicks interacts with her customers, offering samples of upcoming summer menu items, her neighbors have offered compassionate and encouraging words. Hicks said her customers all want to see Rosebud Coffee House continue to succeed as a destination for people to come together on Muncie’s Southside.

“They're not only voicing it, but they're also showing up,” Hicks said. “It takes a village — it's not an individual. As an entrepreneur, you’re by yourself — you're jumping off the cliff, and you're taking all these risks.

“My name is on everything, but my family and in-laws gathered around offering support and assistance. Everybody has just come together to help us do this crazy thing. They're all proud of it, and they all take pride in what we're doing.” 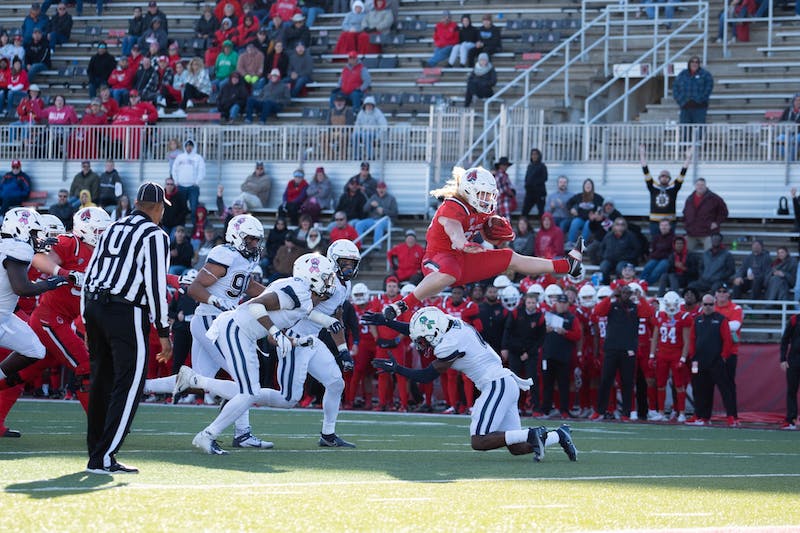 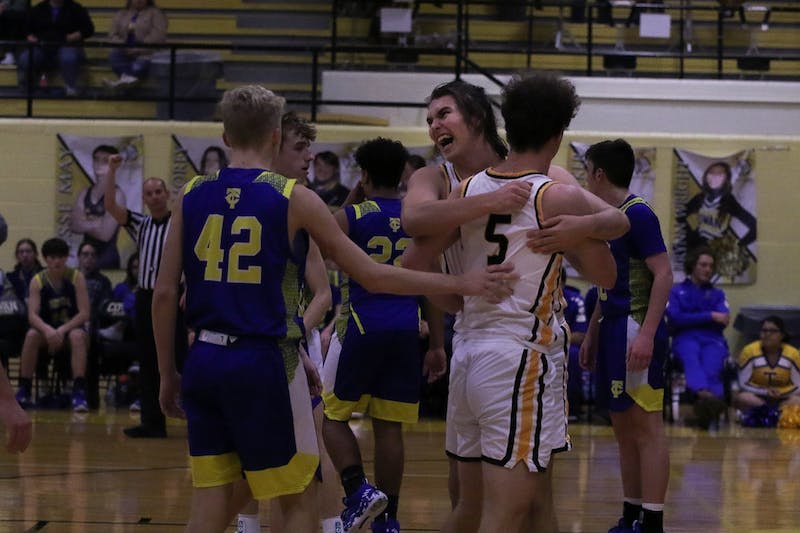