Behind the redesign of 'Sonic the Hedgehog'

I’m sure by now you’ve already heard about the backlash the Sonic the Hedgehog movie has been receiving lately, most notably for Sonic’s uncanny design. Ever since the design was initially leaked, everyone and their mother has been tearing this naked man-hog apart. The mockery only increased when the trailer dropped just a few days ago and we finally saw Sonic with realistic human teeth and the proportions of a weird toddler-adult hybrid. Even Byte’s own Tanner Kinney couldn’t help but join in on the Roast of Sonic, and we’ll be following up on his thoughts with this feature.

It’s clear that an overwhelming majority of viewers were not too keen Sonic’s live-action design, enough for the production team at Paramount Pictures to take notice. Only two days after the trailer dropped, director Jeff Fowler announced that due to overwhelming criticism, the team will be going back and redesigning Sonic.

Now at first glance, this sounds like fantastic news! The production team is actually listening to criticisms from the fans and applying it to their own work to hopefully deliver a better product, which is rare to see from a major Hollywood production. However, once you take a step back to think about the implications of this change and what this mean for the film’s production schedule, especially if they’re still aiming for that November 2019 release date, things start to look a lot less sunshine and rainbows for the people working on the film.

9 V O L T@9_volt_the Sonic the Hedgehog movie will be getting a day one patch https://twitter.com/gameinformer/status/1124067261780779008 …
Game Informer✔@gameinformerSonic the Hedgehog's movie director has heard the feedback and vows to fix the blue blur's design. https://www.gameinformer.com/2019/05/02/sonic-movie-director-vows-to-fix-hedgehog-design … 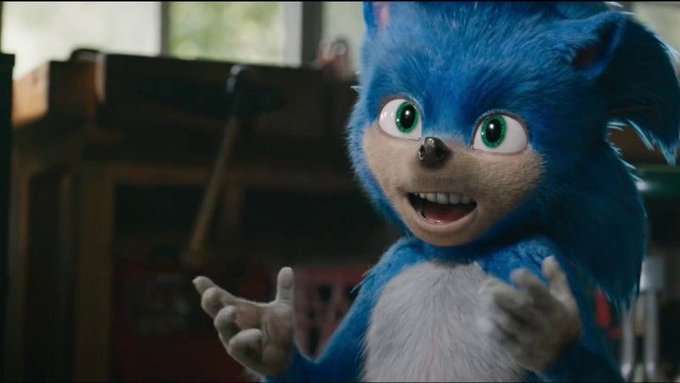 1,892 people are talking about this

One important thing to remember about the production of this film is that as bad as Sonic’s design might be, the special effects and animation teams still put a ton of hard work into bringing the character to life. As much as people like to devalue the work that goes into CG animation, it is not an easy job in the slightest, and it cannot be understated how much time and energy goes into modeling, rendering, and animating a single character for a high-budget production. Now imagine you’re an animator on this project. In spite of the backlash the design has received, you’ve poured countless hours into animating this character and you’re doing the best you can with what you’ve been given to work with. Now imagine having to do redo months, possibly years worth of hard work with no extension on release date because some people on Twitter were meme-ing on a design they were forced to work with. I don’t know about you, but six months to completely reanimate most of the movie sounds like a total nightmare and there’s no way that’s going to be accomplished without the SFX/animation team having to work (most likely unpaid) overtime and compromising their health in the process.

Bobby Schroeder@ponettplusi feel so sorry for the animators on the sonic movie who were probably already telling them their focus test approved design looked weird and bad and are now being forced to fix it this late in production. honestly i'm prepared for it to look extremely similar or somehow worse
2846:39 PM - May 2, 2019Twitter Ads info and privacy

75 people are talking about this

Now maybe I’m overreacting here. Maybe the changes they’re making are small enough to where they won’t have to completely redo a ton of work and force their employees to crunch. However, if they’re going to be making major changes to the design like most fans want them to do, then they’re not only going to have to overhaul the model, but also the animation rig as well. It’s not as easy as slapping a new Sonic model over the rig they already have, because that rig was specifically designed with the character’s original proportions in mind and they’re going to have to do everything again from scratch if they don’t want the character’s movements to look incredibly janky. Even the tiniest changes to the model could completely mess with the rig, which means that they’re going to have to redo all of Sonic’s animations from scratch, which again leads to more work from the visual team. I really don’t want to see another Sausage Party situation where animators are being severely undercompensated and treated poorly, but there’s no way that kind of production schedule is going to be healthy for the Sonic animators and I won’t be surprised if we get a similar situation of animators speaking out about their awful work conditions sometime around the film’s release.

Now let’s put on our tinfoil hats for a second and assume that this whole thing was just one big publicity stunt. The Sonic design we were shown in the trailer and all the promotional material was meant to elicit a negative reaction out of the general public and they secretly had this better design hidden away until after the backlash. Sounds absolutely ridiculous, right? Well not according to various people on social media who are throwing this theory around in hopes that Paramount isn’t cruel or incompetent enough to make their employees crunch that much. I’m going to be honest, while I wouldn’t be shocked if this somehow turned out to be the case given the absolute ludicrous nature of this project, this sounds like a huge crackpot theory on par with some of the stuff people have come up with for The Shining.

Pan-Pizza@RebelTaxiI keep wanting to believe the Sonic movie purposely made an awful design, animated just what we saw in the trailers while the real movie would have a normal looking Sonic all along.
1,1537:06 PM - May 2, 2019Twitter Ads info and privacy

196 people are talking about this

Considering that this design and even details about the trailer were leaked months before it even dropped, you’d think that the redesign would’ve also been leaked alongside it. Even if they somehow kept that under wraps, there’s still one major hole that completely invalidates this theory: merchandising. If they had no intention of using the original Sonic design in the final film, they wouldn’t be using that design in all the film’s promotional material and upcoming merchandise. We’re already starting to see merch for the film pop up in the form of this horrifying Halloween costume, and there’s almost no way that there isn’t going to be some kind of toy line for this film since the Sonic series in general is known for being heavily merchandised. Companies need to plan months in advance and communicate with a film’s producers in order for their merchandise to coordinate with the film’s release, so they would’ve had to have known about the alternative design in advance and not push out stuff with the old design.

Jenny Nicholson✔@JennyENicholsonY'all the conspiracy theory that they intentionally designed the worst Sonic they could and released months of posters teasing the fake design only to incite backlash and stage a "redesign" with the animation they had all along is better than the illuminati
11.6K11:01 PM - May 2, 2019Twitter Ads info and privacy

2,061 people are talking about this

If Paramount really did just keep this new design under wraps and didn’t tell the merch producers until after they’re sitting with warehouses filled with outdated Sonic movie merchandise, that would not be a good look for them. In that scenario, they would’ve just wasted the time and resources of another company to produce merch that will be more or less irrelevant as soon as it hit store shelves. Again, I wouldn’t be shocked if this weird conspiracy theory somehow turned out to be true, since such a bold marketing strategy is something that is way too fitting for a franchise like Sonic, but I don’t really think Paramount is either smart or dumb enough to come up with such an elaborate scheme.

A better looking Sonic won’t save this film

In the end, what is changing Sonic’s design really going to accomplish for the film? Will a better Sonic design really affect the quality of the film’s story or writing in any way? While I won’t try to argue that Sonic’s design was good, the trailer had other problems beyond the design of our favorite blue mutant punching bag. None of the jokes in the trailer even came close to landing, the story doesn’t seem interesting at all, and “Gangsta’s Paradise” does not fit thematically for a Sonic movie at all. While there were some things I liked about the trailer, such as the admittedly clever concept of Jim Carrey slowly losing his sanity over the course of the film and becoming the iconic Dr. Eggman we all know and love, it still wasn’t a very good trailer and did very little to appeal to either Sonic fans or anyone looking for a fun movie. At this point, Paramount is just wasting time and resources trying to salvage a mediocre film not by fixing any of its core problems, but by making major cosmetic alterations that will put a ton of strain on their animation team just so people would stop meme-ing on their character design. Considering that this franchise is infamous for spawning some of the worstpieces of media under rushed production schedules, this recent development doesn’t inspire much confidence in the film’s quality either.

Travis [ThatGomuGuy]@TheUpbringerI know there's more than just "fixing" something. There's thousands of handshakes and contracts that go into a production like this. Nonetheless, I still believe it should be delayed for the health of the team. Six months is not long enough.#gottafixfast #nottoofast #SonicMovie 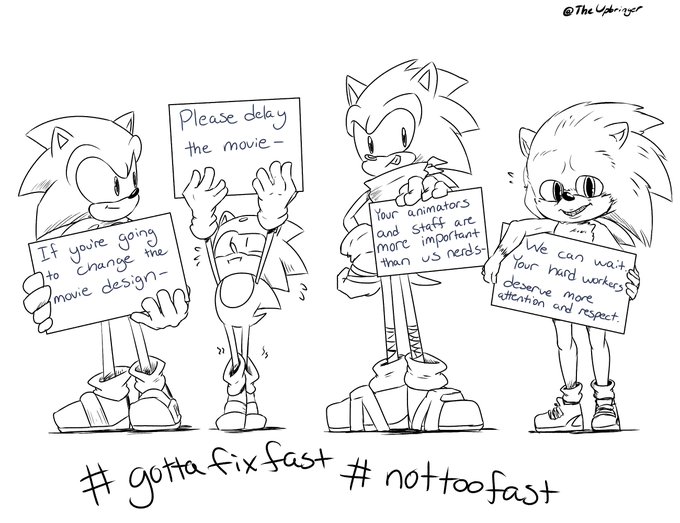 14.1K people are talking about this

The most insulting part about this whole fiasco is that the initial Sonic design shouldn’t have even made it past the cutting room floor. With the backlash films like The Smurfs have received for their uncanny hyper-realistic designs, they should’ve known that doing the same with Sonic wouldn’t have gone over well with the general public. I wouldn’t even be surprised if the design team brought this up but they were forced to work with it anyway because the higher-ups insisted on it to make the film more marketable. Even Sonic’s original creator Yuji Naka was highly critical of the design when it was first leaked, and the producers still thought it looked fine to release.

Even though the producers had plenty of chances to change the design that wouldn’t result in the animators crunching, it wasn’t until after the trailer dropped and the film was six months away from releasing that they thought to change the design without even thinking about delaying the film. This whole mess could’ve been prevented if the design went through some more thorough quality control, but instead, the animators are being punished for the higher-ups’ mistakes. Even if they just took the L and stuck with the initial Sonic design, that would’ve been better than just messing up the entire production schedule.

I genuinely hope the higher-ups at Paramount realize that forcing their animators to crunch is an incredibly bad idea and delay the film for the sake of their health, because even if the movie turns out to not be very good, the team still deserves to be treated with respect so they can make the best product they possibly can.

By Baylie Clevenger and Jack Gillespie

What you need to know before 2020 census starts in Alaska