As someone who has personally felt the impact of mental illness, junior psychology major Chassica Price wants to help those in similar situations.

In order to do this, Price decided to implement a Ball State chapter of the National Alliance on Mental Illness (NAMI).

“I have bipolar disorder type one, and way back when I tried to commit suicide, I got a huge bill from the doctor,” she said. “I thought it kind of sucked that I had to pay for it.”

NAMI is the nation’s largest nonprofit, volunteer-only mental health organization dedicated to improving the lives for the millions of Americans affected by mental illness, according to its website.

The organization exists on national, state and local levels to allow people to share their experiences.

In 2017, NAMI Indiana named the Delaware County branch, which Price sits on the board of, Affiliate of the Year.

Price established a support group, NAMI Connection, at the beginning of the semester. The group meets at 7 p.m. every Tuesday in Teachers College, Room 229.

“I got so much from [support groups] and I want other people to benefit from it too,” Price said. “It is completely free and there’s just so many people that can’t afford treatment.”

Dr. George Gaither, assistant professor of psychological science, will be the advisor for the NAMI student organization.

“It’s a group of people that have common interests, that are dealing with mental health conditions, that come together to basically just talk about what they’re dealing with and get support from one another — provide support to one another,” Gaither said.

Before the chapter is started, Price must first fill out paperwork including appointed roles, such as vice president, and fundraising officers. Then she must get approval from the Delaware County Board of Directors and the Ball State Office of Student Life.

The Office of Student Life requires students forming new organizations to attend workshops explaining the process of becoming a recognized student organization, complete an Intent to Organize form, upload a constitution on Benny Link and attend a Student Activities Committee to discuss the organization’s purpose.

Gaither said students tried to organize NAMI groups before, once in the 1990s and once in 2013, but both failed to stay active because the former faculty advisor left Ball State and the students graduated without successors.

Because of this, Price is trying to recruit more freshmen and sophomores, she said.

Gaither, also a member of the Delaware County NAMI Board of Directors, hopes that students interested in joining NAMI will take their experiences from support groups to other places.

Price hopes that by establishing NAMI she can help destigmatize mental illnesses and make it easier for people to receive help.

“Like when there’s an active shooter at a high school or something, everyone is like ‘Ope, they’re bipolar,’ or ‘They’re schizophrenic,’ or ‘They’re a psycho — they have psychosis,’ when literally being angry has nothing to do with your mental diagnosis,” Price said.

Price said one of the ways she can reach this goal is by sharing her own experiences.

“I just want to go out there and be like yeah I have a pretty severe mental health condition, but here’s how I control it,” Price said. “By educating people, and sharing my experiences, I am helping break down the stigma that is attached to mental health.”

Gaither said he predicts the organization's establishment will only take a little more than a month to finalize. 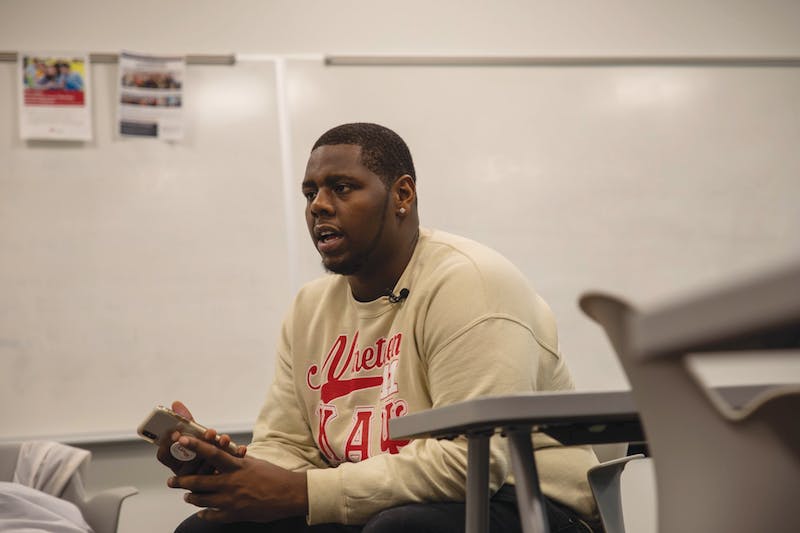