By Kara Biernat
Junior pitcher Carolyn Wilmes pitches the ball during the game against Miami University on April 2 at the First Merchants Ballpark Complex. Ball State won 6-3 to complete the three-game sweep against the RedHawks. Emma Rogers // DN

Junior right-handed pitcher Carolyn Wilmes runs her toe through the dirt behind the pitcher's circle before Ball State softball games.

“I pitch best when I’m relaxed,” Wilmes said. “Before every inning, I say a prayer and I write the number into the ground behind the circle. I started doing this at the beginning of the season when I was told how important the whole routine thing is when keeping calm on the mound.”

Wilmes has a 2.21 ERA in her last 13 games, going 8-2 over that stretch with 47 strikeouts. She attributes her success to her ability to stay focused on the mound. She also has a support system from her hometown Evansville, Indiana, behind her.

“My dad just retired this past summer,” Wilmes said. “He’s an accountant, so he never really could come to a lot of my games over the past two years. However, this year, he has literally driven to every single tournament. He drove to Louisiana, Arizona and Florida. He was barely at our house for like a month.”

Along with her dad, Jeff Wilmes, putting 8,000 miles on his car in the past month to make it to every game and her mother Laurie’s support, Carolyn said her three brothers are responsible for getting her softball career started.

“My mom has also obviously been there whenever she can,” Wilmes said. “I also have three brothers, who are the main reason why I play. I always wanted to be competitive with them when they were playing baseball.”

Going back to her time at Mater Dei High School in Evansville, Carolyn Wilmes is used to pitching under the pressure of a fan base.

“One of my favorite memories was her junior year of high school when we played in regionals,” Laurie Wilmes said. “She comes from a very small Catholic high school with only 500 students to make for a very small high school ball field. Practically the whole school was there. The support she had for that game just about brought tears to her eyes when she saw how many people were there. She just loves the support.”

Head coach Megan Ciolli Bartlett sees Wilmes’ spot on her roster as a positive to the organization’s recruiting process. 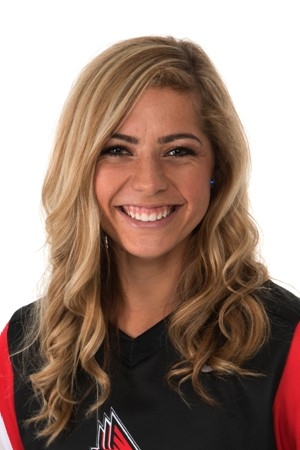 “The Wilmes are just wonderful, hardworking Midwestern people,” Ciolli Bartlett said. “That kid’s values are in the right place and that comes from how her parents raised her in her home environment. The Midwest is such a wonderful recruiting spot for us for that exact reason. When you can get a kid that has the same values, work ethic and talent as our staff, it’s kind of the trifecta of recruiting.”

“[Carolyn] is a special kid,” Ciolli Bartlett said. “She is an extraordinary hard worker and just a really positive kid. The best part is that she is really talented and was built to pitch. She continues to get better and better. If she continues to grow with the leaps and bounds since we’ve had her, the sky is the limit.”

Staying humble with her achievements this season, Wilmes is always looking to improve.

“My biggest challenge is to stay consistent on the mound,” Wilmes said. “That has been my goal all year, since I had some ups and downs the past two seasons. I want to be consistently successful to where my team can always rely on me.”

With her family behind her and her routine set, Wilmes and the Cardinals travel to Athens, Ohio, this weekend to take on Ohio University.

Cardinals fall to Georgia Southern on the road

Ball State shows out at the Bethany Moore Invitational